Football Season, how we have missed thee...

...We went to support our family last night "across the Bay" for the Fairhope vs. McGill-Toolen Football game. My brother plays in the band, third child of the six to be a "Band Geek", for McT and my cousin is a cheerleader for Fairhope. Our family was split and had to walk back and forth to show support for both. Though McT has done well in the past and had won both previous games this year they fizzled out against the Fairhope Pirates...to which we had to hear their new cannon fire for each of the goals scored. Gee, that was fun. ;)
The kids got a kick out of seeing Johnathan and the band play and Miriam LOVED that her "girl cousins" were there AND cheering.
Russell wants to play Football...um, that is all I am going to say about that... 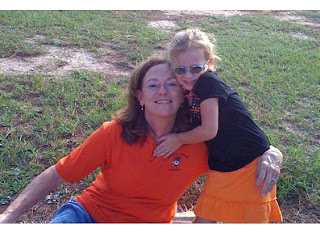 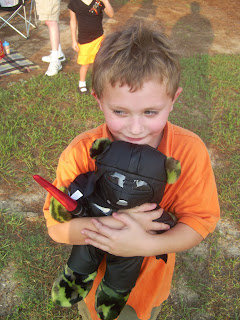 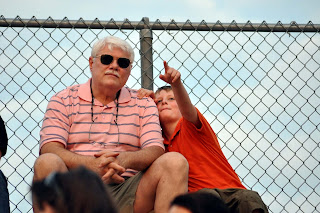 We got there early so we could Tailgate all decked out in our Orange and Black, McT colors. Ok, all except 'Pop' who just bought a fabulous Pink striped shirt and wanted to wear it.  :)
The weather was nice, so that made the experience even better. However, the kids got tired and we only lasted the first part of the half...just long enough to see the McT band play. 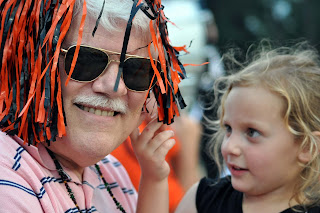 We are getting very excited about watching College Football today and have gotten a few snacks to consume...though we do not have a team we normally cheer for we have decided that in memory of my cousin's good husband, Johnnie Crist, we will cheer for Auburn. I like the colors anyway...though I do enjoy a good cowbell.  :)
**The Darth Bear you see above is Russell's Birthday money purchase. He has named the bear Sam and loves him very much...he was also given a Camo tent and Army Fatigues. "Darth Sam" has followed Russell everywhere...which has gotten him a "bath" already. I am sure they will be getting into a lot more adventures...*** 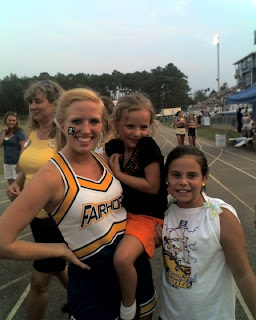 These are some of Miriam's "girl cousins" who live "across the Bay"...Sara is a senior at Fairhope and Erin got to participate in Fairhope's Cheer Camp overthe summer. Man are we in trouble...*sigh*
Football player and a cheerleader? *sigh* again.  ;)