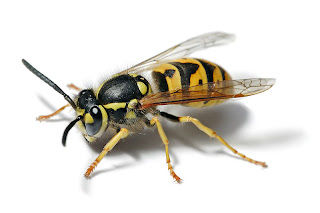 As I was typing the post about our night at Dauphin Island I heard frantic screaming coming into the house and down the hall...it was Russell. He was screaming about bees. As we were looking at his hand, that he was cradling, for the sting he started screaming and jerking in pain AGAIN. We immediately took off his shirt and a Yellowjacket flew out...then we saw another climb out of his shorts...this sent Russell in to panic mode and all of us in a running from the room as Jason tried to battle the Yellowjacket. Then...as if that was not enough...as I was, again, trying to calm Russell down and put him in a bath to soak...I notice another Yellowjacket crawling on his shorts. I quickly rushed him out the door for him to totally strip, for fear their maybe more hidding...so that was a total of 3 Yellowjackets that were visible and 2 that were vanquished in Grandma's house. Russell was their intended target...he got stung 3 times and Jason once.
Posted by The Fosters at 10:57 AM